5 best places to visit in Surabaya 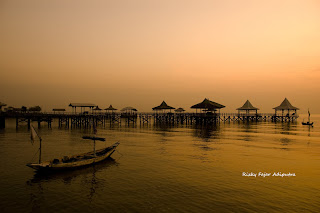 5 best places to visit in Surabaya

My travel friends, Patricia who founder GotSaga.com ask me about 5 best places to visit in Surabaya? Well, actually it’s a confusing question for me because I never think about it ?. And here I’ll try to answer that, and you can check out at Got Saga too.

Oke let me tell you a bit about Surabaya’s facts :
? Surabaya is a shortening from Suro (Shark) and Boyo (crocodile), which is the symbol of Surabaya.
? It is one of oldest cities in Indonesia, which was built more than 700 years ago. We celebrate Surabaya’s anniversary every 31 May.
? We also called it the HERO city as a lot of heroes died in the war to fight the Netherlands in the World War II in 1945.
? It is the second biggest city after the capital city Jakarta, with population around 3 million people.
? Surabaya is located in the east of Java island and it has an important harbor Tanjung Perak to link the east of Indonesia.

Now, here are the 5 best places to visit in Surabaya :

1. China and Arab Town
Located in north Surabaya, this is the first business and culture area. Many old buildings with European-Chinese style are located here,
including: The House of Sampoerna which used to be a cigarette factory and now it become a museum and cafe, Jembatan Merah (historical bridge), Kembang
Jepun Street, Ampel Mosque, the old post office, the PTPN XII building which
was built by the Dutch.

2. Kenjeran Park
The one and only beach in Surabaya, but don’t imagine a beautiful white sea shore because we don’t have it. Although the beach is not that clean there are a lot of things that you can do and see here, like motor racing, horse racing, and also shopping for seafood snacks and seashell
ornaments. There is a Buddhist Temple with a huge “Kwan Im” statue at sea side. You can also see Suramadu bridge, the first bridge to connect Java island and Madura island. If you loves photography, this is the place that you can found a beautiful sunrise.

3. Tugu Pahlawan
Or the Hero Monument, which is a monument to commemorate the heroes that died during the war. There is a historical museum in the area. It is located at the heart of Surabaya. In this area there is also a big old building, Bank of Indonesia, Kepanjen Catholic Church , the Head office
of Indonesia post, the first ballroom in Surabya where the Dutch used to
have parties and the first radio station in Surabaya. This is the old city
area. If you want to try “bebek goreng” (crispy duck) wait until 6 PM, there’s
a famous street hawker opposite the monument.

4. Jalan Tunjungan
A very popular street in the 50’s to 80’s. As the street was so famous, a song was composed for it : ?Rek ayo rek mlaku mlaku nang Tunjungan ? (friends, come and let’s have a walk at Tunjungan). Tunjungan is the main street from north to south of Surabaya. There are some famous old buildings here, including: Siola (the first department store), Genteng Traditional market (with any kinds of snack stores), The Majapahit Hotel (the Sarkies Hotel, which is also a historical place where the heroes fought for Indonesia’s independence on the 10th of November 1945), the last but not least is the megamall Tunjungan Plaza (the biggest mall complex built in the 80’s)

5. Kebun Binantang Surabaya
The Surabaya Zoo, is the oldest zoo in Indonesia. We have a collection of more than 400 species in the area of 30,500 m2. Located in the south of Surabaya. In front of the zoo we can see the Suro and Boyo Monument and Mpu Tantular Museum at opposite.